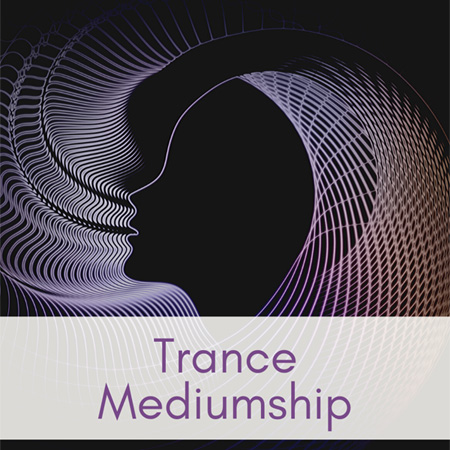 In today's world, the language of Spirit communication is changing and you will hear more about inspirational speaking, overshadowing and channelling.

Inspirational speaking is an application of mental mediumship (clairvoyance, clairaudience and clairsentience) where words are impressed on the medium by "mind to mind" communication.

Overshadowing is where Spirit wrap themselves around the medium's aura in order to impress their thoughts and personality.

Channelling is similar to trance mediumship and in some quarters used as an alternative word for trance. But they are not to be confused.

Trance Mediumship is the deepest form of communication where Spirit literally blend with the medium at the physical level.

What is Trance Mediumship?

It is the oldest method of Spirit communication, often associated with seances and physical phenomena. Trance itself refers to the altered state of consciousness that the medium enters. Like all types of mediumship, many years of study and training are required. The medium will sit to prepare and enter into an altered state. Physical changes occur to the medium's body, such as - a slowing of the heartbeat, deeper breathing, altered brain patterns and lowering of the body temperature. There is also an altered awareness of sounds, touch, space and conscious thought.

The medium will then allow their Spirit communicator (guide/control) to blend their energies with them, thereby allowing the Spirit being to merge with their physical and subtle bodies and mind. This process can take several minutes. However, in Sarah's case, the trance transition occurs very quickly.

In a true trance mediumship state, the essence of the Spirit communicator will be felt by those watching and listening. The Spirit being will be able to impart not only their thoughts/ideas but also a sense of their personality. Changes to the appearance of the trance medium may also occur. With Sarah, her facial features are seen to change as the muscles in her face are altered by the communicator. It is also very common for changes to occur in the spoken voice. These range from tone and depth of the voice, dialect and accents to mannerism and speech patterns.

Sarah's main trance communicator, Master Chou, was Chinese and has a slight accent but he also speaks much faster than Sarah and his sentence structure and use of grammar are very different to her own. There are also physical changes as Master Chou was 102 when he died and hunches over when he speaks. He also gesticulates with his hands far more than Sarah does. (Please note these changes are not to be confused with transfiguration, which is a form of physical mediumship and use ectoplasm to create a mask.)

Working in partnership with Spirit

Trance mediumship is a working partnership between medium/channel and a communicator. Sometimes it is confused with possession and it should not be; in no way is the trance medium being possessed. This is at all times a willing and loving relationship between Spirit and medium. The trance medium always has control over when they enter into the trance state. Some of this confusion arises because of the use of the word control. Spirit does indeed take control of the trance medium's mind, body and voice but not without permission.

The depth of that control and the level of consciousness of the trance medium also varies depending on the intent and conditions of the communication. Therefore, trance mediumship has several levels or layers. These refer to the lack of conscious awareness of the medium and the amount of control Spirit have. They range from light trance to deep trance (or full trance). Deep trance is more often associated with physical mediumship and phenomena. [Such as ectoplasm, apports and apparitions.]

Sarah often channels Spirit when she is coaching or teaching. Only occasionally do people notice any change in her voice when this occurs. Channelling is the level most often used for automatic writing, where a degree of physical control is required to move the pen but no other physical changes are needed. There is a fine line between channelling and light trance and sometimes they are hard to tell apart.

Why do Spirit use trance mediums

The reason for Spirit using these forms of communication is to bring forward clear and unaltered information. In truth, the purity of what is spoken is all that matters. By the trance medium/channel moving their conscious mind out of the way they do not alter what is spoken and the true message is delivered. Sarah often advises her students not to worry about being aware but instead to let go of needing to be in control. As you let go of the control you naturally let go of the conscious mind and it becomes passive, thus allowing Spirit to speak more freely.

As the world is changing and seeking more guidance, so more and more people are being called on by Spirit to act as messengers. It does not matter whether you are a psychic, channeller or trance medium. The only thing that matters are the words that are spoken.

For more information about trance and physical mediumship there are biographies, on the following mediums: Ivy Northage, Eileen Garrett, Ursula Roberts, Helen Duncan and Leslie Flint; alternatively, read some philosophies given by Spirit communicators such as Silver Birch, Chan, Seth or Ramadan.

Get your FREE ebook: 31 Days of Wisdom - by Master Chou

Get your FREE ebook

Get your FREE ebook

All consultations currently available online ONLY

Events - The Inside Scoop

Events - The Inside Scoop